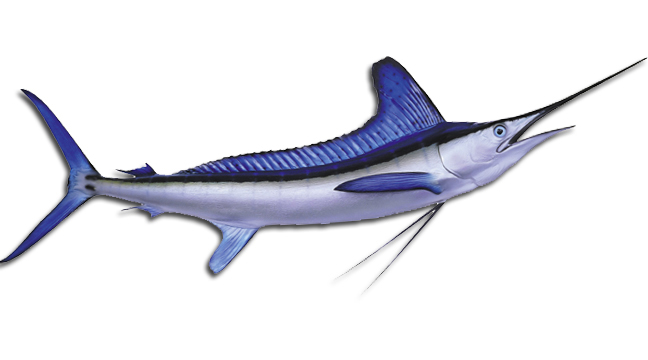 The White Marlin (Tetrapturus albidus) is the most cautious predator of the Marlin family, and is the most difficult to lure to strike. It is found throughout the east coast of the U.S., Mexico, and the Caribbean. Although smaller than the other species of marlin, it is still a strong fighter and beautiful mount with its vibrant shades of blue. Recognized by its rounded pectoral fins, first dorsal fin and anal fin, the white marlin is lighter in color and shows more green than other marlins. They are also noticeably smaller: the average weighs 60 lbs, and the maximum recorded weight for a white marlin taken on rod-and-reel was 161 lbs. The color of the body is dark blue to chocolate brown, shading to a silvery white underbelly, with visible spots on dorsal fin.

The lateral line curves above pectoral fin, then goes in a straight line to the base of its tail. It is thought that there may be separate populations of white marlin in different regions, of the world. Some believing that there is, in fact, a second species, the hatchet marlin. Many consider the hatchet to be a variant of the white marlin; however, recent scientific evidence points to the hatchet actually being a new species, the round scale spearfish. Like other marlin, this is a highly migratory species. They will travel alone or in small groups to increase their feeding opportunities.

The diet of the white marlin is predominately fishes and squids. Groups of whites have been seen coordinating their efforts to congregate bait into a ball for feeding purposes. While white marlin typically roam deep waters, they will also approach areas that are normally too shallow for other marlin. They are often seen in areas less than 8 fathoms deep. Members of this species reach maturity around 51 inches. It is not uncommon to find white marlin up to 8 feet long.