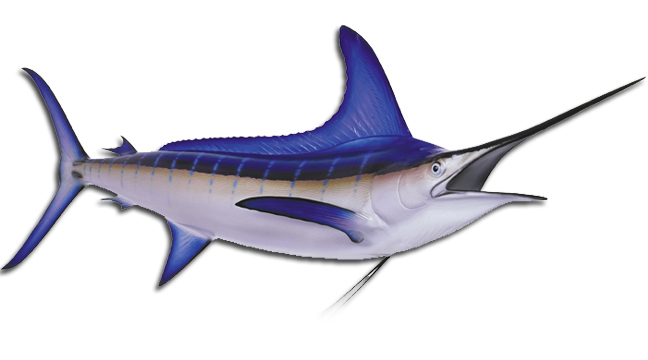 The Striped Marlin (Tetrapturus Audax) also referred to as the "New Zealand Marlin" in some Pacific regions is named for the glowing vertical bands of bright blue that light up when its feeding or attacking bait. Like all marlin they're extremely acrobatic when hooked so keep the camera handy as their aerial displays are impressive and common and will certanly be a memorable moment for anyone.

The body of the Striped Marlin is stretched out and compressed. It also have the thinnest bill of any marlin species but the highest dorsal fin, which normally is at least equal to the depth of their body. Distinct from a Black marlin the leaf shaped pectoral fins on a striped marlin can be folded alongside the body. Striped marlin lower jaw is narrow and pointed, whereas blues and blacks have solid, stocky lower jaws. Blue marlin do display stripes too, which may cause confusion with striped marlin at times, but the stripes on a blue fade very quickly when stressed or dead. The bars on a striped marlin remain prominent even after death occurs.

Like most Marlin, Striped Marlin travel the tropical and sub-tropical waters of the Indian and Pacific Oceans, ranging down as far south as latitude 34 degrees. They are commonly found in water temperatures that ranging from 65 F to 75 F (18 - 23 Celsius) and are the most widely distributed of all billfish. We do know that striped marlin spend most of their time in thermocline which is the upper layer of the ocean just beneath the mixed layer. Striped marlin are a highly migratory species.