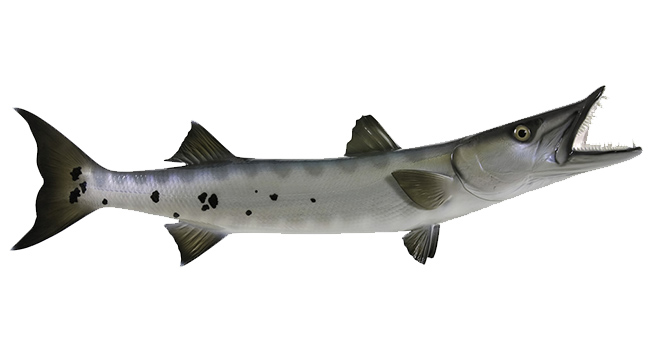 The Barracuda is known as The Tiger of the Sea. It is an inquisitive aggressive predator. The Barracuda provides the angler with an impressive aerial display often jumping several times its own length. The saber-like teeth and are extremely sharp and dangerous.

Barracudas are elongated fish with powerful jaws. The lower jaw of the large mouth juts out beyond the upper. Barracudas possess strong, fang-like teeth. These are unequal in size and set in sockets in the jaws on the roof of the mouth. The head is quite large, pointed, and it is pike-like in appearance. The gill-covers do not have spines and are covered with small scales. The two dorsal fins are widely separated, with the first having five spines and the second having one spine and nine soft rays. The second dorsal fin equals the anal fin in size and is situated more or less above it. The lateral line is prominent and extends straight from head to tail. The spinous dorsal fin is placed above the pelvics. The hind end of the caudal fin is forked or concave. It is set at the end of a stout peduncle. The pectoral fins are placed low down on the sides. The barracuda swim bladder is large.

In general, the barracuda's coloration is dark green or gray above chalky-white below. This varies somewhat. Sometimes there is a row of darker cross-bars or black spots on each side. The fins may be yellowish or dusky. Barracudas only live in oceans.

Only some species of barracuda grow to a large size. The species which do are the European barracuda, barracouta or spet (S. sphyraena), found in the Mediterranean and eastern Atlantic; the great barracuda, picuda or becuna (S. picuda), ranging on the Atlantic coast of tropical America from Florida to Brazil and reaching the Bermudas; the California Barracuda (S. argentea), extending from Puget Sound southwards to Cabo San Lucas; the Indian barracuda (S. jello) and the black-finned or Commerson's barracuda (S. commersoni), both from the seas of India and the Malay Peninsula and Archipelago.