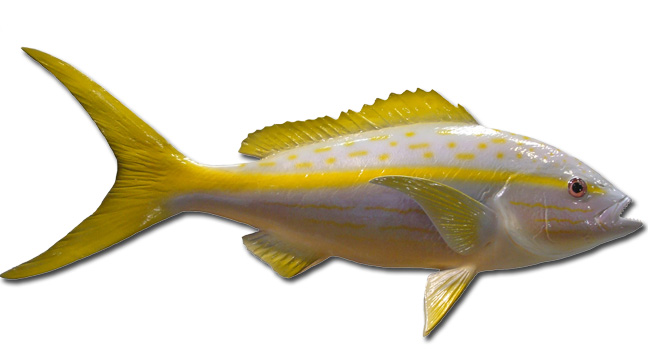 Aptly named for its colorful and relatively large tail, the Yellowtail Snapper (Ocyrus chrysurus) is a highly prized game fish in South Florida and the Bahamas. The scientific name a of the yellowtail snapper roughly translates to "swift-swimming golden fish". Commonly swimming along the reefs but feeds in mid-water depths.

Although abundant, anglers find the Yellowtail a wary eater and a master of de-hooking itself. The coloration is characterized by a prominent lateral yellow stripe originating on the snout, widening, and covering the caudal fin. The back and upper sides are olive to bluish with yellow irregular spots. The belly and lower sides have narrow longitudinal stripes that are pale red to yellow, and the fins are yellowish.

The yellowtail snapper is found from North Carolina to southeastern Brazil, but most abundant in the Bahamas, off south Florida and in the Caribbean. It seems to have the same role in the tropical reef fish community, that the vermilion snapper has with reef fish assemblages in the more northerly latitudes. Both species form schools and are found above the bottom over hard substrates in waters 60-300 ft. deep.