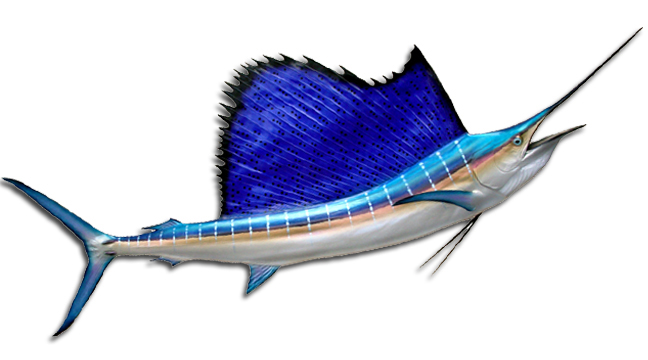 The Pacific Sailfish or Indo-Pacific Sailfih (Istiophorus platypterus) has a different coloration and is also much larger than the Atlantic Sailfish. The Pacific Sailfish with its large dorsal fin is a sought after prize trophy. The blue colorations with the many hues of gold and its size make the Pacific Sailfish a formidable foe and a trophy for any angler and avid fisherman. They are found near the ocean surface usually far from land feeding on schools of smaller fish like sardines and anchovies, which they often shepherd with their sails, making them easy prey. They also feast on squid and octopus.

The Pacific Sailfish meat is fairly hard and not widely eaten, but they are prized as game fish. When hooked, these commanding, aerodynamic creatures will fight vigorously, leaping and diving repeatedly, and sometimes taking hours to land.